5 things to know about the new Canada Child Benefit

Is your family among the 90 per cent the Liberals say will be better off on July 20? You’re about to find out 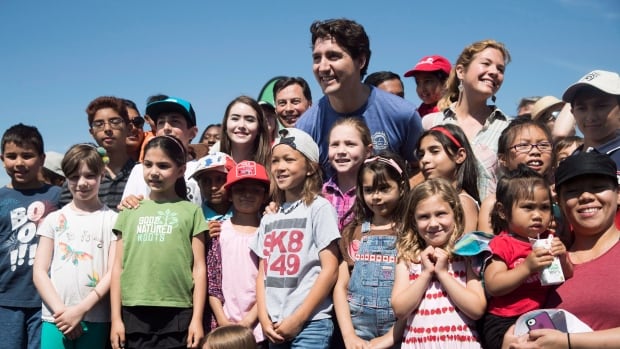 Prime Minister Justin Trudeau and his wife, Sophie Grégoire Trudeau, pose with kids during an event in Toronto last month. Nine in ten Canadian families will be better off once the Canada Child Benefit rolls out July 20, the Liberal government says. (Mark Blinch/Canadian Press)

The Liberals promised during last fall’s federal election that nine in 10 Canadian families would be better off once their new child benefit package rolls out.

Significantly better — to the tune of $2,300 annually, on average, according to the finance department’s calculations for the 2016-17 benefit year.

Is that really true?

On July 20, Canadian families will find out exactly how much their new monthly payments will be.

But assessing the full impact of the new Canada Child Benefit (CCB) may take longer.

Here some things to know about the new monthly child benefit:

How much will families receive?

When the federal budget came out in March, the finance department put out a simple calculator.

Since then, the Canada Revenue Agency has added a more complex calculator for all government benefits. It requires inputting more information, but calculates a more exact figure.

For lower-income households, the CCB is billed as a game-changer. Finance Canada says the CCB will lift 300,000 children out of poverty, compared with 2014-15 figures.

Here’s why: families with less than $30,000 in annual net income receive these maximum yearly benefits: 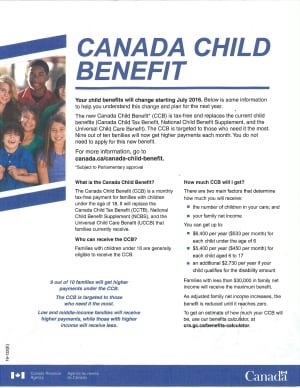 Families with higher incomes receive progressively less, until the CCB phases out entirely for the richest households. But the exact calculation of when that point it reached is a bit complex.

The number and age of children is a factor. So are all the components of a family’s adjusted net income, which is based on line 236 on your federal tax form.

A high-earning family with a lot of deductions may come in just low enough to receive some of the benefit. A single parent making the same individual income as a married parent may receive more benefits than the two-income household.

In other words: the monthly UCCB payments families received until now aren’t padding the income on which the new amounts are based.

Can’t wait for July 20 to find out the exact amount of the benefit? Anyone registered for an online CRA account can look it up now, based on a 2015 tax assessment.

Is this benefit retroactive?

No. Unlike the previous Conservative government’s rollout of its enhanced UCCB last July, there’s no lump sum retroactive payment dating back to Jan. 1 this time.

The legislation to create the new benefit only received royal assent to become law in June. But the federal benefits year begins in July, meaning programs are split over the calendar year anyway.

The revised benefit isn’t the only impact on a family’s bottom line.

The CCB is also meant to simplify things, so it replaces:

Unlike the previous UCCB, the new CCB is not taxable income, so there will be no extra tax hit next spring. That means that even if your monthly payment amount has decreased, you may still be better off overall. 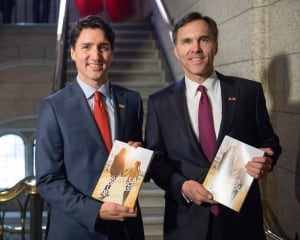 The cover of the federal budget in March was a bright, sunshiney yellow – and the outlook for the household budget of most Canadian families was bright too, Finance Minister Bill Morneau (right) promised. (Justin Tang/Canadian Press)

Families have to do all the math — the taxes no longer paid, but also the credits no longer claimed — before drawing conclusions about whether they’re better off.

And don’t forget: the federal tax brackets changed last January. The middle income rate dropped from 22 per cent to 20.5 per cent, while a new tax rate of 33 per cent kicked in for incomes above $200,000.

How can I make the most of it?

The key to maximizing the CCB lies in minimizing a household’s net income. Any deductions that lower the amount on line 236 of the federal tax return will result in higher monthly benefit payments.

For example, people who don’t contribute the maximum to their registered retirement savings plans (RRSPs) miss out on more tax-free CCB income.

At time of writing, the risk of postal service disruptions this summerappears postponed, but not over.

In the event the labour dispute escalates, the Canadian Union of Postal Workers (CUPW) has agreed to continue delivering the CCB cheques issued on the 20th of each month.

But the government encourages anyone who still receives benefits payments in the mail to sign up for direct deposit.